“There are those who will have seen a Queen tribute act as the half-time entertainment at the Cathay Pacific/HSBC Hong Kong Sevens and turned up their noses.

You might assume that a faux Freddie Mercury on the microphone and a guitarist with a wig so obvious that he was more of a Brian Maybe than Brian May would fail to impress after the big names on show in years gone by.

However, just like the critics panning the recent Mercury biopic to the complete disregard of the cinema going public, you’d be wrong.

The South Stand, which is rightly or wrongly the barometer of the Hong Kong Sevens, lapped it right up. The band might have only played three songs – I Want To Break Free, Radio Gaga and a show-stopping Bohemian Rhapsody – but they got the crowd on their feet and belting out all of the words that they knew.”

We think that Mr White, journalist at The South China Morning Post is clearly a very intelligent bloke with great taste in music!

He wasn’t wrong. The 40,000+ crowd at Hong Kong Stadium did indeed lap up the performances of Queen Forever over the 3 day international Rugby Sevens Tournament. Queen Forever  started off proceedings with Crazy Little Thing Called love on the Saturday morning with Gareth Hill as Freddie Mercury  running around the pitch right in front of the South Stand, revving up the craziest sports fans on the planet and giving them a taste of what was to come later that day. 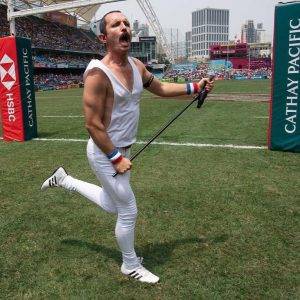 Then for the half time entertainment, Queen Forever ripped out a set reminiscent of Live Aid in 1985 with 4 songs, Another One Bites The Dust, Don’t Stop Me Now, Radio Ga Ga and a show stopping Bohemian Rhapsody which had the South Stand as loud & crazy as they’d been for the entire tournament.

Lots of footage was captured for this momentous moment and shared to social media.

Here are a couple of samples:

We had a fabulous time at the Hong Kong Rugby Sevens and can’t take our brand of foot stompin’, fist pumpin’ Queen classics to you!!!